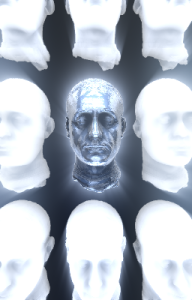 A Day Of Faces grew out of a simple, daft “what if?” concept: what would happen if everybody born on the same day looked the same? It’s since become something a bit more complicated but that’s still the central idea.

And it’s still very daft. But that’s kinda what I’m after with this, coming off the back of an extremely lengthy and precise writing process for what became a novelette called ‘Millennium Surfing’. That is hard(ish) sci-fi, and with A Day Of Faces I wanted to do something entirely different and have a bit of fun. I’m also going to be blogging about the writing process, starting retrospectively now.

‘Generation’ is a gentle intro to the world. You get a few hints about how it works, and it’s all done very deliberately nonchalently, with throwaway descriptions of horns and tentacles. It’s meant to pique your interest without diving too far down the rabbit hole.

In terms of inspiration, I had two things in mind at this point:

The film American Graffiti was slightly influencing the anachronistic setting and the portrayal of some of the characters. This world is meant to feel off-kilter, like an irrational blend of multiple genres and periods.

The bigger influence is Brian K Vaughn’s comic SAGA, which is currently my joint-favourite Thing To Be Reading (along with Kieron Gillen’s The Wicked + The Divine, of which more another time). SAGA embraces its own weirdness while maintaining an internal logic and resolutely refuses to explain its bizarre creatures (so far) and that was definitely a attitude I wanted to try to replicate with ADoF.

‘Generation’ is a gentle intro, with the next part diving into the deep end.