I was part of The First Annual Story Fair

Yesterday I took part in The First Annual Story Fair, an event bringing together a bunch of Wattpad writers to promote their works via an online event hosted on Facebook.

I had no idea what to expect. 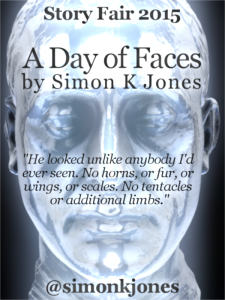 Since I started using Wattpad I’ve had only positive experiences but this was my first foray into a full-on networking event. It could have been anything from a super-lame wash0ut to something entirely overwhelming.

It ended up being neither, instead serving as an extremely fun way to highlight your work in the company of other Wattpad writers, with an eager crowd of readers jumping from one showpiece to another. Over 100 writers (and, therefore, stories) were highlighted throughout the 24 hour event, with each writer having their own dedicated post on the Facebook event page.

Once my book was posted the comments started coming thick and fast. This was A Day of Faces‘ first promotion outside of my own low-key efforts, so I was very curious to find out how a new audience would react to the concept.

So, that was the first few minutes. A good start! I ended up with 50 likes and 25 comments, all positive and sounding intrigued. That was a result I was very happy with, especially considering that the event appeared to be heavily weighted towards romance fiction (as is Wattpad generally) with A Day of Faces being something of an anomaly (which is appropriate, really).

I have no doubt that Wattpad is still a largely untapped resource for me in terms of reaching an audience. I’m already super happy with how A Day of Faces has been received but I sense it’s really just the tip of the iceberg. Digging into the wider community and networking aspects is essential.

Huge thanks to all the readers who showed up and commented, as well as to the organisers. It’s always fascinating to encounter an online subculture – turns out Wattpad readers are passionate, enthusiastic and very willing to give their time.

You can see the entire conversation on Facebook over here.

[…] this year it was an exercise in exploring the unknown and, much like writing A Day of Faces and taking part in the Story Fair, it was a resounding […]