I lost my spaceship in No Man’s Sky

I wrote a while back that I only started enjoying Far Cry 3 when I applied my own artificial restrictions to its free-form playground (in that case, using only the bow, despite the plethora of weaponry on offer). Taking an accidentally similar approach to No Man’s Sky, I gave myself a similar limiter: not having a spaceship. In this instance, though, it was entirely accidental.

Note: I’ve written an article comparing No Man’s Sky and Subnautica and how the design of their menu systems make for very different games. You can read it over on Medium.

Having enjoyed a good few days of zipping from planet to planet and across star systems, I set down upon Rokport, a barren but resource-rich world dotted with ruins, derelicts and traders looking to find their fortune. Flying low over its surface, that’s when I spotted it: a crashed ship, perched precariously atop a huge, tall mesa. I landed near to it, right on the edge next to the sheer drop, to see what state it was in. Given the sparks, scattered, broken equipment and the fact that it wasn’t even on its landing gear, I should have guessed. 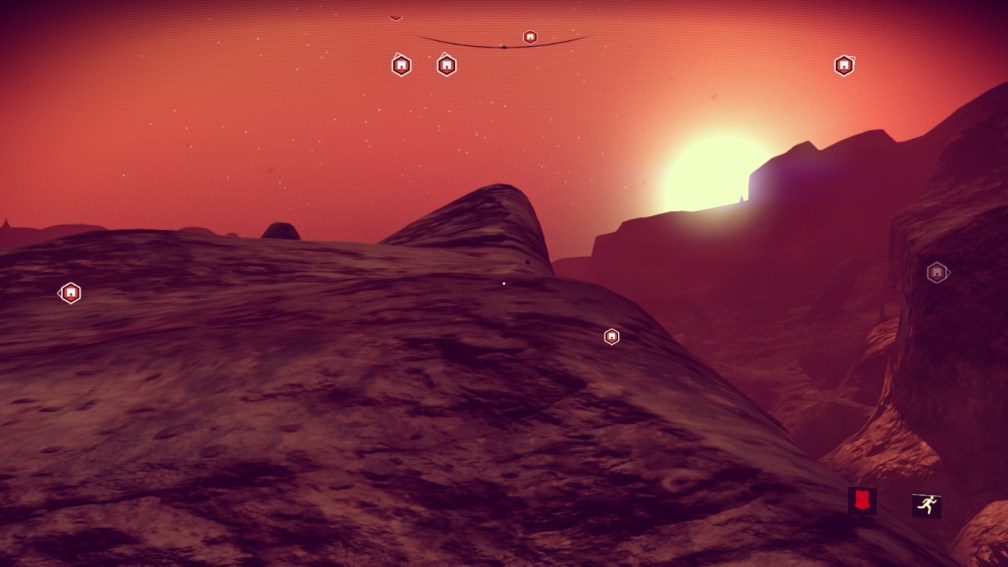 So, a few broken systems. All of them in fact. That’s OK, though – I’d already had to fix my original ship at the start of the game, and that had been pretty easy. So I transferred over most of my stuff and got to work on the repair job. First up, the launch thruster. I had to go grab some elements from a cave down on the canyon floor but it was easy enough. Still couldn’t fly, though, as the main pulse engines were dead. No problem – just needed carite and some zinc.

Didn’t have any zinc.

No problem – zinc was all over the place and had been plentiful everywhere I’d gone, just like iron and carbon. Off I went into the barren wasteland. Veeery barren. No zinc. OK, must be some in this cave, sheltered away from the winds and dust. Still nothing. I scoured the nearby hills and some other caves, in the process nearly getting entirely lost underground (terrifying). 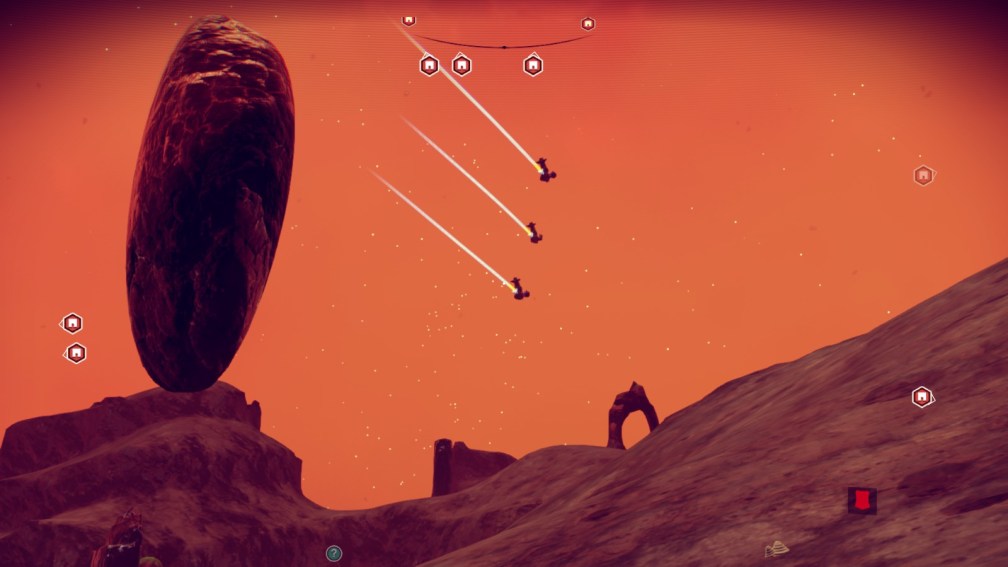 I was entirely without zinc. I couldn’t fix the engine in my new ship. My old ship had vanished, perhaps taken by some wiser explorer. I was stranded.

So I started to walk, because I had no other choice. The nearest outpost was 25 minutes away, so I set off, keeping a close eye on my life support systems. Fortunately the planet was low atmosphere, which meant no acid rain, and was a comfortable temperature with plenty of plutonium resources scattered about. The main risk was falling to my death, as the landscape was filled with canyons and crevices.

Along the way I encountered various ruins and abandoned buildings. It was an exciting trek, which felt captured the determined resourcefulness of movies like Apollo 13 and The Martian. Me versus the elements. I didn’t even know if the outpost would have what I needed. If it didn’t, I wasn’t sure if I’d have the stamina to hike another half hour. My character might never make it back to his ship. 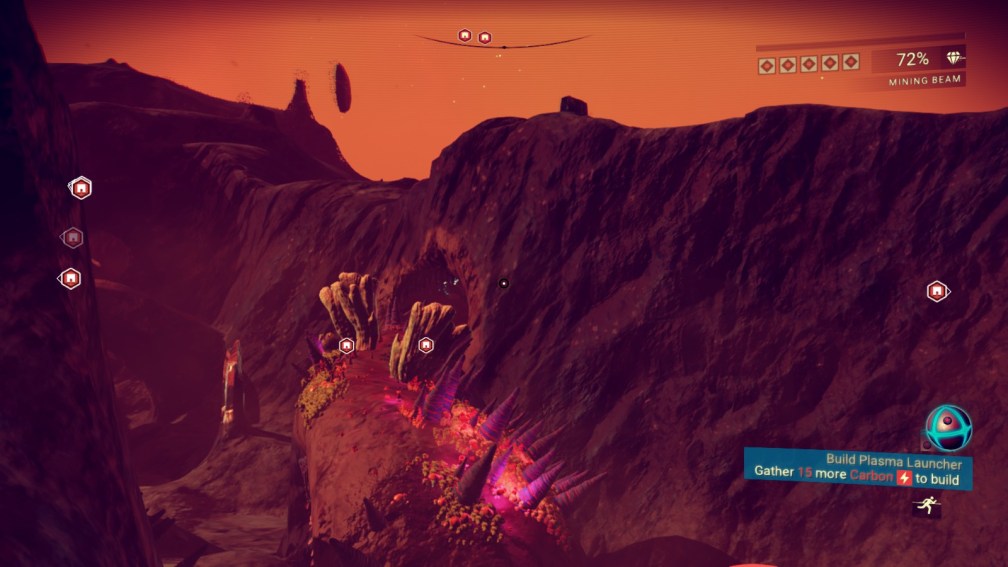 There was a huge canyon to negotiate just before the outpost,with a dizzying drop that required judicious ‘s use of my jetpack. I climbed up the far side, crested the top and saw the outpost down below. It had a landing pad and everything.

Walking up, I was hoping it would have a trading terminal inside. And, god, please be selling some zinc. 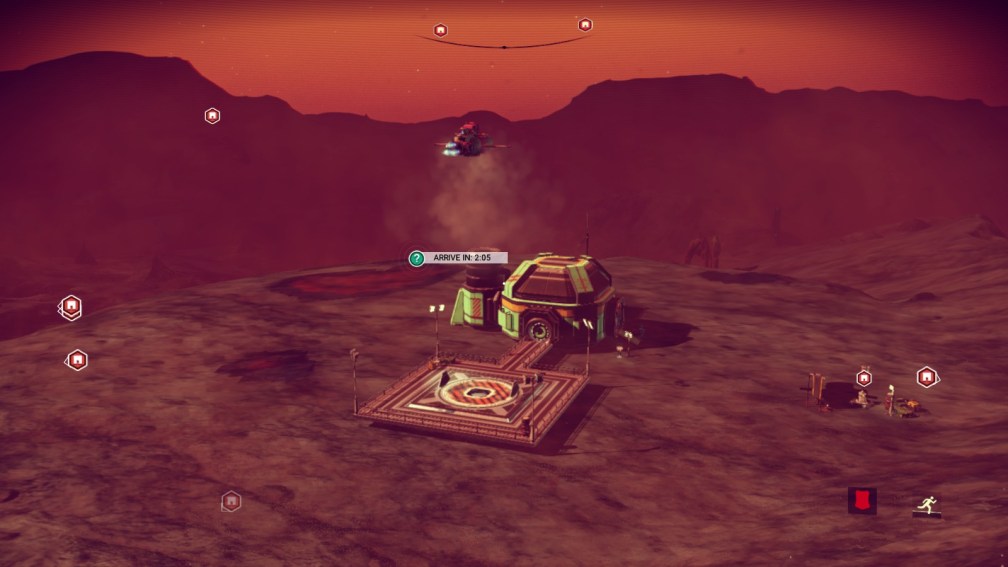 I was in luck. I bought the zinc, teleported it back to the ship – still perched atop its remote mesa – and fixed the engines. She was ready to fly, at least in atmosphere. But I was still a long, difficult half hour walk away.

Heading out to the landing pad I discovered I could remotely summon the ship, if only I had a bypass chip. Turns out I can make those, which I did, and I plugged in and sent the order.

A fee seconds later my ship flew over the hills, circled around and came down to land. It was a beautiful moment. I climbed in, closed the hatch and sighed with relief. 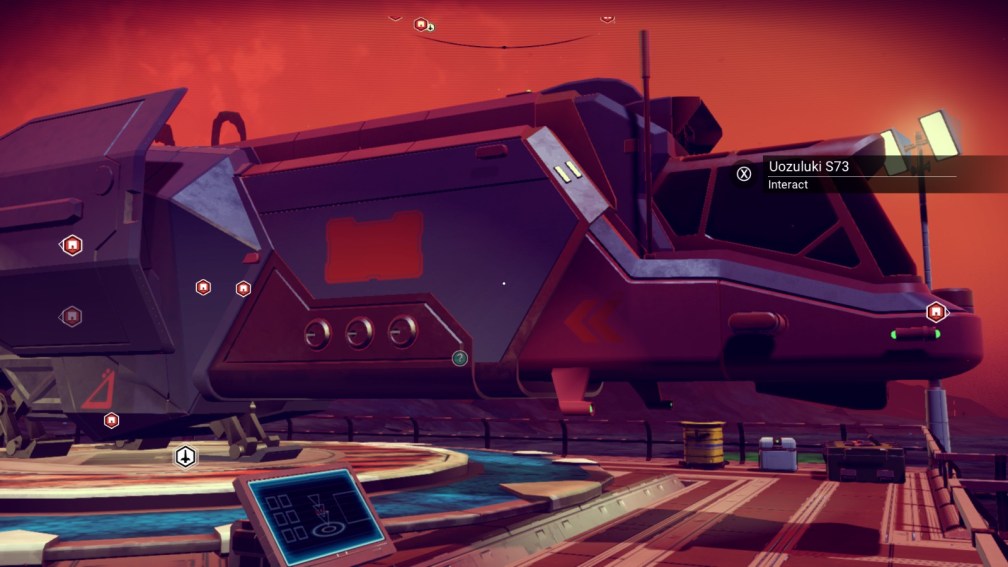 I’d never had anything quite like it in a game. Few would dare to leave me stranded, potentially forever, or require me to walk for nearly half an hour in real time to resolve the problem (complete the quest?).

My time with No Man’s Sky has been full of these mini, procedural stories, as the game intersects with my own imagination. It allows for a sense of adventure that the curated, safe theme parks of most modern RPGs and adventures can’t possibly risk.

Perhaps it’s nostalgia, but many of my favorite games has always had a lot of sandbox elements. The original Elite comes to mind (where I had four saved games, depending on if I felt like playing as a Merchant, Miner, Merc or Pirate that day.), or Sid Meier’s Pirates, where I had one play through where I decided I was just going to wipe the hated Spanish off the map and place all their ports under English Rule. I succeeded with this goal, then attempted as much in-game goals as my now aged character could achieve (then was thwarted when the Mysterious Stranger wanted me to take a Spanish Galleon–with no Spanish ports left, this meant I had to take the one Galleon that came from Europe each September).

Still, there was a lot of satisfaction in attaining my own goal, outside of those of the designers.

One reason I don’t play that many games any more is that they’ve become unmemorable. The cancelled Star Wars Battlefront III was the last shooter that attempted something fundamentally new with the experience (the PSP version, renamed “Elite Squadron” worked well). Every MMORPG is “find group, go from A to B then mash combat button. Walk from B to C and repeat. Sell redundant gear. Repeat,” which is a style of gameplay that bores me (My lovely wife Laura keeps trying to get me to play Guild Wars with her, and doesn’t seem to understand why Minesweeper hold more interest than Guild Wars). Every RPG is Dungeons & Dragons based rules mechanics where you cutscene, the go from point A to B while grinding against random attacks. Repeat.

It’s a good sandbox game that can engage the imagination, allow the player to create one’s own story and goals, and have something interesting to tell others

Your writing on No Man’s Sky indicates this type of experience… Yes, one could voyage to the center of the Universe, but I’m certain that there is at least one player who will spend the entire game within a pair of systems. Others will just try to fill up as many Atlas entries as possible. The simple mechanics allow the player to project a range of behavior and motivations…

No Man’s Sky, really, is all about your imagination. You have to actively engage with the game in a fictional conversation, give yourself to it, and make it a 2-way thing. If you sit back and wait for it to bring you some game, all you’ll see are the simple and repetitive mechanical structure – which is what a lot of people have bounced off, and which reviews have (rightly, really) highlighted.

It’s when you meet the game halfway that it comes to life. Being stranded on this one planet without a vehicle has really given me an opportunity to dig into the concept and the world and the isolation. In a game where you can fly between stars at a moment’s notice, suddenly being grounded and forced to walk a huge distance put everything in context. This was my crossing of the desert, Lawrence of Arabia-style, with no guarantee that I’d make it. Seeing the outpost when I finally got there produced palpable relief. A genuine emotional reaction far more powerful than any scripted cutscene could achieve.

Which isn’t to say I have anything against that alternative approach, when it’s done well. The Witcher 3 is an astounding achievement in scripted, interactive storytelling, for example.

(incidentally, I’ve been playing Divinity: Original Sin with my wife. It’s a slightly less obtuse co-op alternative to Guild Wars which is far more immediately satisfying. Although the writing and voice acting is fairly awful, the mechanics are fun)