The Noirwich Crime Writing Festival 2017 is fast approaching and tickets are swiftly disappearing. It’s going to be a pretty great festival when it hits next month. Noirwich 2016 was the first major event I got my teeth into after starting at Writers’ Centre Norwich last year. Though crime fiction isn’t my thing, I do get genre fiction – even if mine tends to be scifi/fantasy, so it was something I immediately understood and it proved to be a lot of fun.

This year I’ve been involved from the beginning and as a comms team we’ve refreshed some of the core design principles behind the festival. I thought I’d take a look at some of the thinking behind the changes to the logo.

The Noirwich logo for its first three years was something like this:

This was a riff on the UNESCO City of Literature logo, which is a handwritten ‘Norwich’ penned by none other than Ian McEwan:

Adding the blood splat to transform the original into the Noirwich logo was a fun move which was in keeping with the pun-based festival’s name. For 2017 we decided to refresh the look, while retaining the more playful elements.

The first port of call was to look at crime fiction covers and posters, both movies and books. There’s a wealth of stunning design to draw upon going back decades and I wanted to make sure that the festival’s branding was in keeping with the genre it celebrates.

Turns out there’s two distinct type of noir imagery. You’ve got the older, pulpier stuff from the 40s and 50s which helped define the idea of film noir. Posters like these:

Then you’ve got the more modern crime thrillers, such as:

(OK, so Inception isn’t exactly a crime thriller, but its aesthetic is definitely an influencer in terms of poster design)

Then, there’s the modern crime novel. Some have a more varied look, such as this lot from Noirwich 2016 authors:

The key aims with the new logo were to reflect these various design sensibilities, increase clarity of the festival’s name and pun and retain the recognisable blood splat motif.

Some super basic, rough testing with varying capitalisation was all about identifying a way to make the ‘noir’ pun more evident and avoid people misreading the festival name as ‘Norwich’, or assuming it to be a typo. 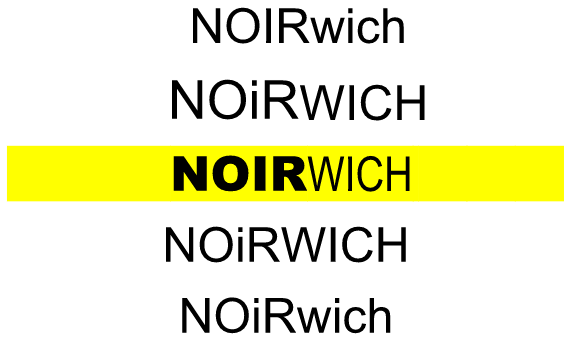 The yellow highlighted version was a notion to use a police tape reference, which was quickly abandoned as an idea. Ultimately, the decision was made that using simple lower/upper case letters doesn’t differentiate the ‘noir’ and ‘wich’ parts of the word without looking clunky and awkward.

This is when the blood splat was brought back in. The font weighting used in the yellow highlighted version also developed, resulting in this:

The specific fonts used were temporary and not really appropriate – they evoke feelings of Westerns rather than crime thrillers. However, the general principles of using font weightings and the blood splat to separate the ‘noir’ and ‘wich’ while at the same time highlighting the key point of difference in the pun – the ‘i’ – were established.

The font was tweaked to something more appropriate – Monotype Grotesque – with the final version being this:

Also of note is the brand new blood splat. The original version was a stock image, while the new logo has a procedural, generated blood splat. In fact, we can now make as many blood splat variants as we want, at varying shapes and sizes. Hence it was a simple matter to make an alternate one to serve as a call-to-action button on the website:

The other benefit of a procedural splat over the stock image is that it can be fully animated, for use in lower thirds or idents. You can see that in action in the Noirwich 2017 promo video:

The logo and the splat are just one aspect of the festival’s branding and style, but they help to give all subsequent digital and print media a focus and direction.

Noirwich tickets are on sale now and you can find out more a noirwich.co.uk.

UPDATE: Exciting to see the Noirwich logo on this year’s street banner in the city:

The importance of staying on target

I’m a big believer in Simon Sinek’s Start With Why notion. It posits that before you get to the how and the what, you really need to figure out the why. This applies to any endeavour, be it personal or Read more…

Just over a year ago I started working at Writers’ Centre Norwich, primarily to help deliver the International Literature Showcase. I wrote about my reasons for changing job over here. Last week, 20-23 June, saw Read more…

I made a new motion graphics tutorial for the HITFILM guys. Check it oot: